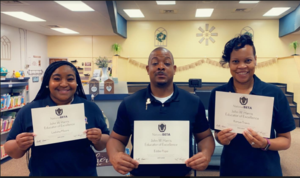 According to the National Beta, a recipient of the John W. Harris Educator of Excellence award entails these four achievements:

National Beta has more than 8,500 clubs and 20,000 sponsors; however, only 34 clubs and 91 sponsors earned this award. This acknowledgment is the highest honor you can receive as a sponsor. We are so proud of our Teachers within the Hattiesburg Public school District and our amazing students who also were recognized for placing in the National Beta Convention.

Woodley Elementary students participated in the Virtual National Beta competition in June 2020. Nationally, the Woodley Beta team placed 2nd for Mixed Media, 8th in group talent, and 8th in 2-dimensional design.
The students were also recognized for their service projects that were done throughout the 2019-2020 school year.
Out of the entire United States, the Woodley Beta team was 1 of the 3 Mississippi schools that were recognized. Congratulations to all of our awesome students!
Published August 5, 2020 Print