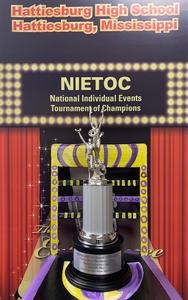 The Hattiesburg High School Forensics team claimed another national finish at the 2020 National Speech and Debate Association Championships which were held virtually this past June.
Forensics Coach, Scott Waldrop says, "It was a huge accomplishment for them because they had to do a lot being that we had to transition to online due to COVID-19."
"We could only talk to our students through call, email, and zoom during this process," said Waldrop.
Adonai Hill and Casey Buisson competed in duo interpretation while finishing Fifth in the nation and competing against hundreds of schools from across the country. The duo that Hill and Buisson performed was titled, “Angel” by Betty Jean Willey.
This marks the seventh national finish in the past decade from Hattiesburg High School since 2010. In 2017, Hattiesburg High School Forensics Team won the national championship.
"One of the greatest rewards is that the kids can work independently and self-motivated, when you can achieve that, it's worth it all. Going through this process means that in any situation they know how to prepare," said Waldrop.
Casey also accepted a full-ride speech scholarship at the University of Alabama and will be competing for the Alabama forensics council for this Fall.
Published September 25, 2020 Print